This is a story told from three perspectives about the impact and aftermath of an unfortunate accident on Thanksgiving Day 2017.

The day was unusually warm for a late November Thursday in Goshen, Indiana. The air was calm and my leaves were still. There seemed to be more people frolicking and being active on this particular day. Sometime late in the afternoon, multiple people climbed on my limbs racing towards the top. I knew I was strong, sturdy, and ready to support the weight of two human adults and three squirrelly teenagers. One particular adult climbed higher than all of the others. He had a careless confidence in his skill and ability to out climb the adult and the younger climbers. Let’s call him Mr. Swiftly. My strength is in my base and my roots. Admittedly, I have an abundance of leaves and branches at my top however I do not have much strength up there. You can see me swaying in the breeze and casting shadows from my remaining leaves. I tried to warn these folks that going too high or moving too fast to the bottom would be dangerous. A race to the bottom was successful for 4 of the 5 climbers. The one with the reckless abandon jumped from branch to branch as if he was in a jungle or a massive squirrel. An outward jump towards my lowest branch was meant to deliver bragging rights for this particular climber as the first one to reach the ground. I tried to make a connection. Sadly though I could not hold on to this human as he missed my branch and fell quickly towards the ground. If only I could warn him to tuck his arms in before hitting the ground. The message could not be delivered. Both hands were outstretched to stop the impact. I knew it was going to be a forceful impact. I knew it was going to be painful. I knew he could not hear my warnings. He fell hard onto his hands and even smacked his head on the ground. It appeared to hurt. However, Mr Swiftly jumped up, brushed the dirt from his face and went inside the house. I never saw him again. 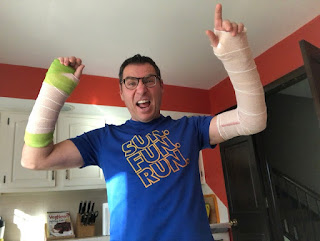 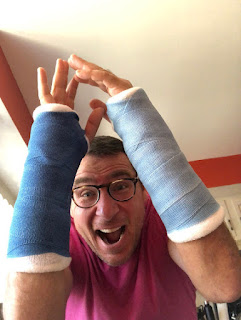 Have I got stories for you? Where would I even begin? I’ll pick it up just after the Tree left off. I’ve seen Mr. Swiftly act careless and reckless plenty of times.  Now, I have a confidentiality agreement so I cannot go into too many details. You can call him Mr Swiftly, but I prefer to call him Mr. Stubborn. He is independent and self-sufficient to a fault. That Thursday night and the next morning were quite interesting to me. Mr Stubborn drove us home after the great fall and believe it or not 15 hours later, he drove us to Goshen Hospital. The pain and the swelling must have been unbearable. He must have realized that the impact caused something to break. I have to say sitting in that parking lot for almost 3 hours on what the world calls Black Friday was a lonely start to my day. I would have much rather enjoyed being at Target or somewhere that I could see my peers. He finally came out to see me and I noticed he had a temporary cast on the left arm and a wrap from the knuckles to the upper arm. Both arms were in shoulder slings to prevent movement. Somehow he took off the slings and navigated us home. Steering with knees and fingertips for 7 miles from the parking lot to home was treacherous and probably illegal. The following Monday he drove us to the orthopedic surgeon where the cast and the sling switched arms. There was now one plaster cast and one temporary cast. As a Nissan Altima, I’m no orthopedic surgeon, but it looked like the casts were meant to immobilize Mr. Stubborn. Once again, he drove us home. There were many trips of this fingertip driving. It definitely wasn’t safe, but I couldn’t tell him not to do it. One last encounter I would like to share was about 2 months later. Mr Stubborn still had a cast and a brace on his arms. He was driving home from competing in a 50K winter trail race in Kalamazoo Michigan. At a red light a semi-truck driver looked down from his big rig, blasted his air horn to get our attention, and rolled down his window to ask a question. He asked my guy, Mr Stubborn what happened?  Mr Stubborn was startled by the interaction and rolled down his own window to say “I broke my wrists.” Mr Truck driver said something like “oh that sucks. I have carpal tunnel” as he showed his own brace through the window. From November to March, everyone had a similar question about what happened. Random strangers from all over would create uncomfortable encounters. I’m not going to go into any more detail but I have to tell you, Mr. Stubborn treated me well even though I knew he was jeopardizing his own safety to drive. I bet it hurt to control me, but I never asked. 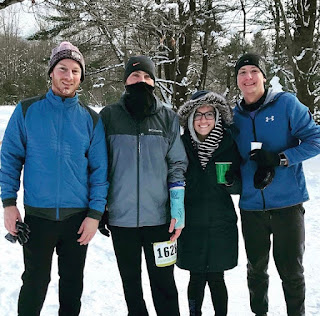 Have you ever seen a grown man sit on the floor, covered in red pasta sauce, surrounded by broken glass, and crying uncontrollably? You do not know empathy until you experience something like this. Mr Helpless was doing the best he could from late November until early March with two broken wrists, 1 surgery, and 2 immobilizing casts. I’ve known him intimately since his teenage years. Every day he would visit with me listening to music, while slicing, dicing, sautéing, and cooking. The passion and joy of being in here was evident. Making food, sharing food, and eating food is a love language for him. I am proud to help bring joy to this man and his life. It pained me that day to witness the emotional breakdown caused by one simple accident. The stain of the trauma is still evident on my white cabinet and drawer faces. Marinara memories remain. When you are unable to rotate your wrist to open a jar or to twist a cap, you have to do whatever it takes. Mr Helpless was struggling to pop the top of a regular jar of sauce. A smack on the bottom of the jar with a plaster cast was a thudded failure. Mr Helpless knew that some pressure on the side of the lid could break the seal. One, two, three taps on the counter and no pop was heard. With more force, more velocity, and more pressure the fourth tap thrusted harder onto the lip of the countertop. Smash, pop, spill, splash, crack. The lid popped. The glass shattered. The sauce erupted from the jar. On the counter. On the overhead cabinets. On the drawers. In the drawers. On the floor. On the ceiling. On the wall. On his clothes. On his cast. On his other cast. On his face. The jar and the sauce were separated. At that moment, all of the pressure, the stress, the tension, the sadness, the feeling of being helpless jumped from the tree, out of the car and onto me, the kitchen. The release of emotion flowed from the heart to the eyes. The tears and the red sauce created an instant sea of sadness. Sitting in shards, surrounded by pools of sauce, and the spilling of tears from an emotional release have etched a memory in this room. A memory that remains ever present. A memory that will never surpass the joy and passion of cooking but will always be a reminder that a kitchen can support every emotion. One broken jar can try to break a man, even if just temporarily. It is in that freedom of emotional release that can give that man hope and strength that things will get better.  Things got better. 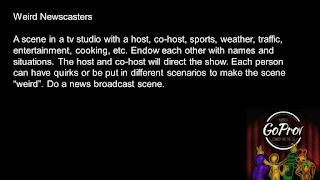 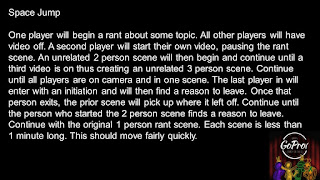 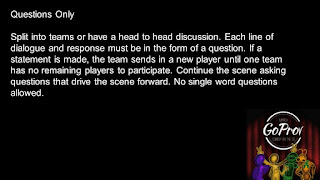 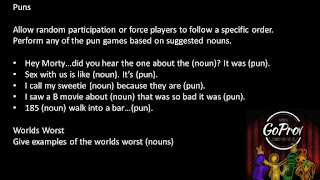 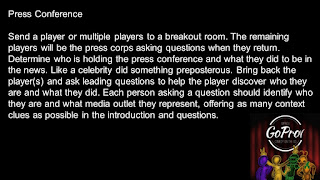 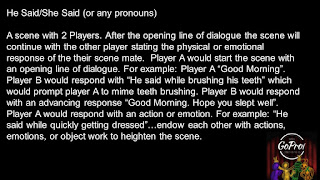 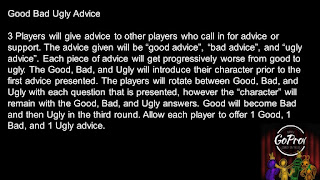 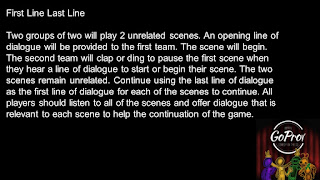 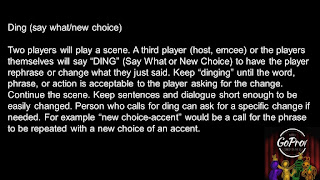 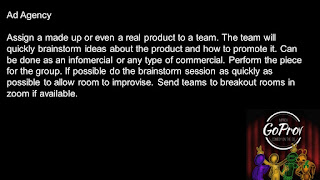 No transcript available.
at December 07, 2020 No comments:

Welcome to Episode 3 of the Steve Freeto podcast. This is a very special episode. We have a guest that we are vetting right now. If this guest gets through, this will be the best podcast ever recorded. We have a very small window to talk with this guest. I don’t want to ruin the surprise, but this guest has a brand new book to promote. I wont ruin the surprise but this guest wrote about a promised land. But first a quick word from another book.

For some folks, improv is life and those folks know that life is improv. There’s a new book to help you improvise your life. Go, Improv is the new book by Stephen Freeto. Go, Improv is a collection of quick stories, guidelines, advice, and short form improv games for life and the stage. Go, Improv can be purchased through the online devil or you can buy local. Five dollars from every purchase made through Goshen Art House will be a donation to Goshen Art House. Support those not for profit arts organizations. Now more than ever, we need the arts. Use The Freeto at checkout for an autograph! Thats THE FREETO.  https://art-house-105912.square.site/

That’s another great partner. Hey, here at the Steve Freeto podcast I want you to know that there are so many great podcasts out there. Thanks for checking out mine. This is the podcast to end all podcasts.

Do you ever have that not so fresh feeling? Do you have sweat in your nether region? Have we got a solution for you. Now is not the time to have that swampy feeling from your pits to your toes. Stink Stank Stunk time to get rid of that funk. Use The FREETO at check out. That’s THE FREETO. Now take your dirty ass to the shower.

Welcome back. I am so excited for our guest. I hope we have time!  Keep in mind that I personally decide what sponsors join our podcast. Everything you hear on this podcast is run by me. My team does a great job at vetting these partners. Just like we make sure all of our guests meet our standards.

Remember Columbia House Records? Well, it’s back. You can get 12 cassettes  for the price of one Penny. Cassette tapes are the new vinyl. Do you want some tunes to be mailed to your house? Well, just pick from our most popular albums and you will be riding the storm out with the greatest hits. Like a bridge over troubled waters, Columbia House will take you to the stairway to heaven. Just find a penny, tape it to our envelope and drop it in the mail. Don’t forget to pencil in THE FREETO for free shipping. Also, as a listener to the Steve Freeto Podcast, here is a little tip. Do not use your own name. Make up a name and you will get free music. 12 tapes for one penny.

I’ve got a great story for you. Have you ever been so embarrassed that you cringe just thinking about the memory. Hmmmm...Just call me BT cause I’m a big tease. But first, a quick word from our sponsor.

Are you bored bingeing TV? Do you miss having friends? Do you want more out of life? Well, guess what folks its back...the POKE is back on Facebook. As a giver, you can poke all your friends. If you are a receiver, you are guaranteed to get poked back. Poke poke poke. It’s the best. Sorry folks, no offer codes with the poke. It’s free, Go ahead and poke now. 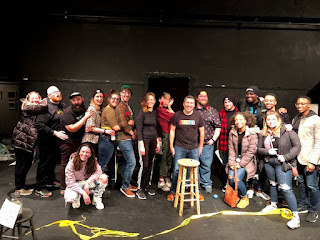